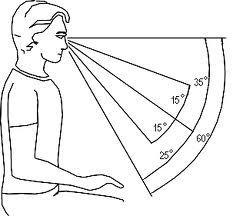 The old guidelines that recommended that the monitor be placed at eye level were based in part on the belief that the resting position of the eyes (considered to be the most comfortable gaze angle) is 15° below the horizontal (Morgan, Cook, Chapanis, and Lund 1963). New evidence (and some that has been around for a while) shows that, while the eyes might be most comfortable with a 15° gaze angle when looking at distant objects, for close objects they prefer a much more downward gaze angle (Kroemer 1997).

The drawing to the right shows the optimum position for the most important visual display, 20 - 50° below the horizontal line of sight, according to the International Standards Organization (ISO 1998). 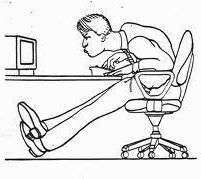 It is uncomfortable to maintain the same posture for an extended period of time especially using a traditional monitor position. When users tire of the head-erect posture, the acceptable alternative postures with an eye-level monitor are limited.

Almost always, the user will slump the shoulders while looking out of the top of their eyes. This bending of the upper back downward with the neck extended is extremely uncomfortable; predominately because of the mechanical compressive load it creates on the upper and lower cervical spine joints.

Neck extension and forward head posture, while acceptable for the visual system, has been associated with discomfort and degenerative disease.

Lower monitor placement can increase the acceptable options that users have for neck movement. With a low monitor position you can hold your head erect and look downward. When that posture becomes tiring, as eventually it will, a low monitor will allow you to alternate among a wide range of flexed neck postures that allow good visual performance and will not increase postural discomfort.

Many "ergonomic" guidelines include drawings that show a computer user with arms, torso, thighs and legs at 90° angles and the head perfectly erect. And, of course, the feet are "flat on the floor." This is the "correct posture." Generally users try it for a few minutes and reject it because it’s too uncomfortable.

Turville and colleagues (1998) compared monitor locations with the center of the screen at 15° and 40° below horizontal. Sommerich et al., (1998) also examined work performance. Both studies found improvement in productivity when the center of the monitor was changed from eye level to about 35° below eye level.

Remember, computer work is near work. Many authors have noted that computer work differs from other near work in that most near work is done with a downward gaze angle, and for some reason computer work is done at a horizontal gaze angle. Instead of locating the monitor at a viewing angle similar to that of other near work, authorities often recommend special "computer" ergonomics. This represents the view that ergonomics means adapting the worker to the work environment. It is actually the other way around, the task of ergonomics is to adapt the work environment to the worker! 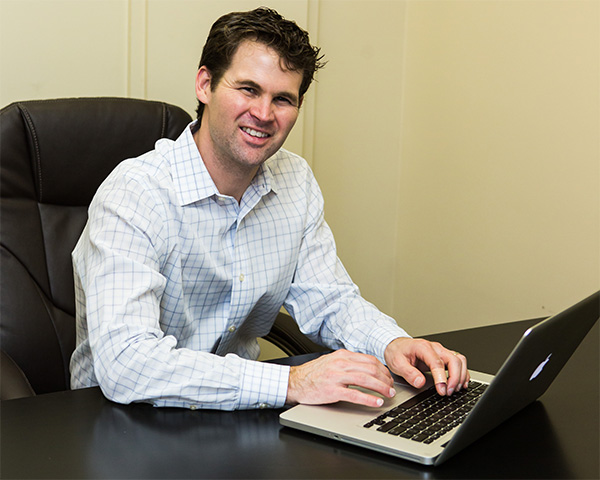 Do you have a question for a physical therapist?

If so, you can ask a physical therapy expert at Reid Clinic.